Photo by @stereophototyp on Unsplash

Dr. Sewall has played a central role in highlighting the methodological concerns undermining the validity of many scientific investigations into the relationship between digital media use (DMU) and well-being. While a doctoral student on a shoestring budget, Dr. Sewall designed and executed a study examining the (in)accuracy of self-reported DMU. He found that the accuracy of people’s self-reported use was impacted by their level of well-being (e.g., how depressed they were feeling) and amount of usage (e.g., how often they used social media). Given that most studies investigating the relationship between DMU and well-being use self-reports, this finding raised serious concerns about the validity of findings for a wide swath of cyberpsychology research. This project resulted in publications in Technology, Mind, & Behavior and Mobile Media & Communication, the latter of which has received 50+ citations since its original publication in 2020 and registered an Altmetric score of 212, placing it in the top 5% of all research outputs scored by Altmetric.

The impact of these works led Dr. Sewall to assist with establishing an international consortium of early career researchers with a focus on improving the methodological rigor of cyberpsychology research. Dr. Sewall has played a central role in the work of this group, which thus far has produced a review, published in Current Opinion in Psychology (https://psyarxiv.com/exhru/), calling for a more robust methodological approach to cyberpsychology, as well as a meta-analysis, published in Nature Human Behavior, presenting an authoritative investigation of the accuracy of self-reported DMU. This meta-analysis found strong evidence that self-reported media use is not an accurate reflection of actual media use, and has garnered substantial attention since its publication in 2021, as evidenced by its 113 citations and Altmetric score of 668 (top 1%).

Dr. Sewall’s work highlighting the methodological weaknesses undermining much cyberpsychology research has enabled him to make substantive contributions that are not only methodologically rigorous, but also highly important. Dr. Sewall’s dissertation employed a longitudinal design, objective measures of media use (i.e., digital trace data), and advanced statistical methods to investigate the prospective relationship between DMU and psychological distress among young adults. This work, which has thus far led to publications in high-impact journals Clinical Psychological Science and { Journal of Affective Disorders, found that fluctuations in different forms of DMU had no prospective effect on psychological distress at the within-person level.

Given the substantial scientific and public interest in this area, Dr. Sewall’s rigorous work indicates that DMU may not be as harmful to youth as popularly assumed, which has substantial implications across policy and practice domains. 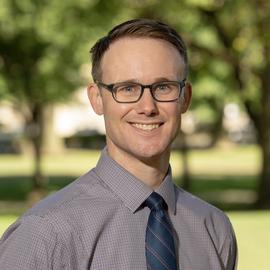